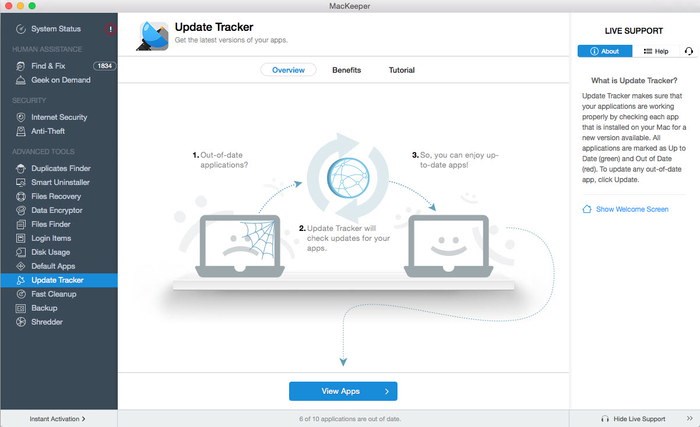 A long time ago, some of my friends used to say that Mac OS X was the safest operating system, in the World, and that no virus could affect it. It’s not the same story anymore. macOS (as it is currently spelled as)is one of the operating systems in the World, which is highly targeted by malware and attackers.

The fact that macOS is a UNIX based operating system, offers little defense when it comes to malware and viruses. I’m not sure how many of you remember how several malware (Flashback, Mac Defender, MacProtector, MacGuard etc) hit Mac, a few years ago. It was the time, when Apple itself, was forced to release an official update to patch the security flaws, which the malware  exploited to infect the machines.

Regardless of how many safety precautions you take, your Mac could still be vulnerable to malware. You should always install the latest updates from Apple, and use a secure browser, and ensure that you check your installed apps from time to time, to see if there are any apps which have been installed without your knowledge.

How does one keep a Mac machine safe then? The best thing to do, is to use an app which can protect your computer from such dangerous viruses, and also help you optimize the performance of the device. And for this, we recommend, MacKeeper.

Let’s see what makes the app great, and what better way to start than by analyzing the UI. MacKeeper has a beautiful GUI, which comprises of two parts. A sidebar on the left, and a larger portion on the right, which reflects the selection made in the sidebar.

The sidebar has several sub-sections in it, which are categorized under Human Assistance, Security, and Advanced Tools.

The first section grants you exclusive access to train an Apple Certified Professional, who can help you clean your Mac and fix the problems that MacKeeper detects. Once the app scans your system, it will generate a report of the junk files, or security issues and performance issues it finds, and using a secure connection to its server, submits this report to the expert.

You can chat live with the expert, who will assist you and answer your queries. Don’t worry this is completely optional, and you can skip these, if you don’t want to use the feature.

The next section, Security, has some of the most important features in MacKeeper, with the first one being, Internet Security’s, which helps in protecting your Mac. Its job of course is to scan for and remove any malware from your system. 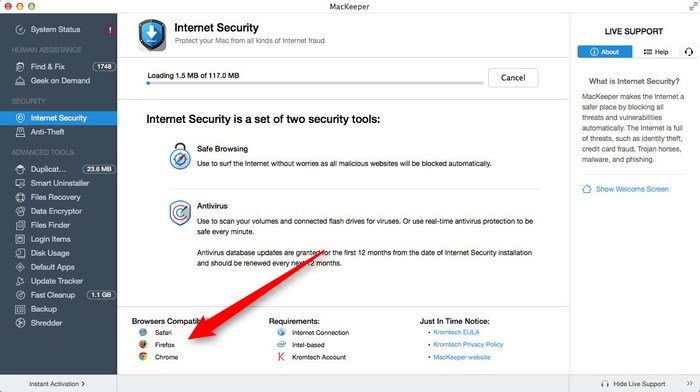 This works both online, and offline, when you are away from a network connection. Viruses can infect your system from a USB drive or other offline source, so having your Mac protected when it’s not connected to a network, is a great advantage.

The most common way that malware infects systems, is when you are online, especially from your browser. MacKeeper has a Safe Browsing feature, which protects your browser in real-time. This lets the app block malicious websites automatically, but don’t worry, you can whitelist websites you don’t want to block, or the opposite, blacklist websites which you want to know are unsafe and have to be blocked. This features works in Apple Safari, Mozilla Firefox and Google Chrome. In fact MacKeeper also protects your computer against Windows viruses, phishing attacks, unsafe downloads, spyware, and more.

MacKeeper also has a nifty little security feature, called Anti-Theft, which lets you track a missing or stolen Mac with the Track My Mac iPhone app. It allows you to remotely lock the app from your Kromtech account. The iPhone app can send the location of your Mac using a map (geolocation), take a picture of the thief and send it to you.

Let’s move to the next section, Advanced. This is where you will find several tools which you can use to optimize your Mac. The first of these tools, is the Duplicates Finder. Often we have multiple copies of the same file store on our Mac, and this eats up precious storage space, which can otherwise be used for saving something else. MacKeeper’s Duplicates Finder detects files of copies of the same file, and lets you delete them. This feature is so smart, that it even detects duplicate files which are saved with a different name. The detected files are listed neatly, and you can manually check them, before deleting them.

Smart Uninstaller is the next tool in the list. The biggest problem when you uninstall apps, are the left overs aka remnant files, which are left behind. These can eat up a good chunk of space if you aren’t paying attention to the app’s folders. But we can’t keep a close eye on it every time. And that is where MacKeeper’s Smart Uninstaller helps. When you use it, the feature completely removes apps, and its settings or plug-ins and other junk, so your Mac stays spic and span, post the uninstall process.

Deleting files is always the best solution, what if you accidentally deleted a file you wanted? How do you recover it. There is no need to panic, because MacKeeper comes with a Files Recovery option, using which you can scan for files which were deleted, and recover them if possible. You can undelete audio files, videos, photos, documents, archives and more.

Data Encryptor is a particularly neat tool in MacKeeper, because it allows you to encrypt important files, like your financial documents for example, so they are not accessible to others. Encrypted files can be locked with a password, for restricting access to the content. Files which are encrypted are not seen in Finder’s search results either. 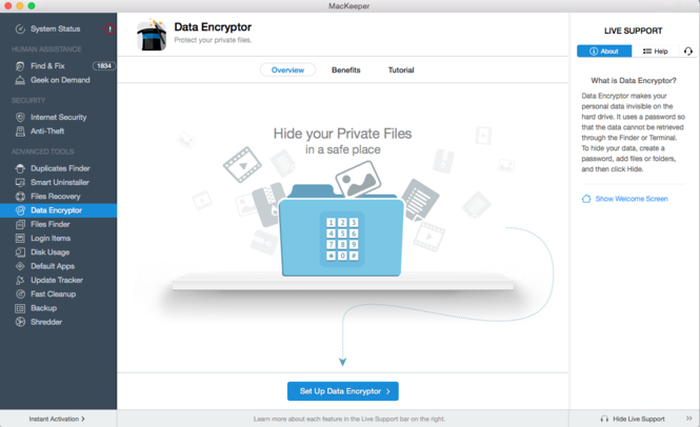 Is your Mac booting slow? Take control of which apps run during start up with the Login Items section in MacKeeper. This will speed up your system’s start up with a few clicks.

Sometimes even with your best monitoring efforts, the hard drive runs out of storage at times, but it is not easy to check which folder is using the most space. MacKeeper’s Disk Usage, lets you analyze your hard drive, and list which files and folders are using large amounts of space. These are displayed in color coded sections as folders which are using more than 10GB, between 1GB to 10GB, etc.

I often test a lot of apps, on my computers and very often these include multiple apps which can handle a particular file format (like a PDF doc, or an mp3 audio). So every time I open such a file, I have to pick which app has to open it, and this is kind of a pain. Sometimes we accidentally change the default app handler, and changing back is something we often neglect to do. MacKeeper’s Default Apps tool lets you assign the default app which has to open the file format.

OS updates are essential for every device, be it a smartphone or a computer, and your Mac is no exception. How do you make sure you have all the updates that Apple has released for macOS? What if you had missed one or two important security updates from the App Store? Fear not, for you can monitor it easily, with MacKeeper’s Update Tracker. In addition to monitoring OS updates, it even checks for and lists all available updates for the apps you have installed on your Mac.

Fast Cleanup is another particularly useful tool in MacKeeper, and one which you should use regularly to ensure that your browsing data is cleaned. It also removes other junk files like logs, temporary cache, unused language packs, app remnants and more. This ensures the performance of your Mac remains speedy and efficient. This tool does its job with a few clicks of the mouse.

Your data is important, and you must save a copy of important files, to prevent data loss. You can easily take a backup of your files and folders using MacKeeper, and save them to an external storage device, like a USB Flash Drive or an external hard disk, or even an FTP server. You can even schedule backup tasks to run automatically. 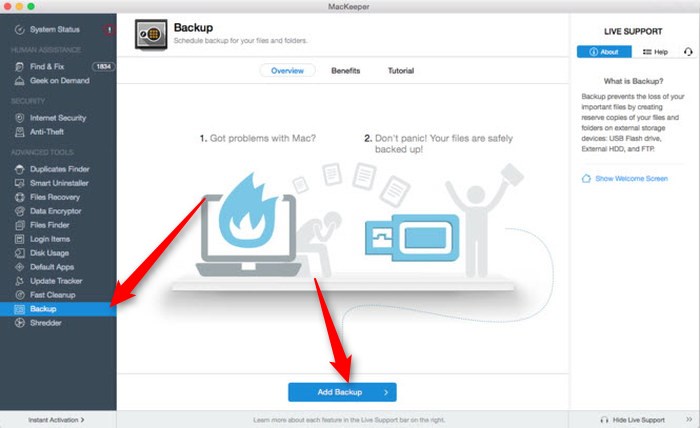 Shredder is a tool which you may want to use if you are selling your Mac, or replacing the hard drive or simply handing it over to someone else. This tool deletes files and folders securely using an algorithm which prevents the recovery of files even when special recovery software is used.

With all these incredible and powerful features available from an easy to use interface, MacKeeper is a real keeper, for your macOS device. 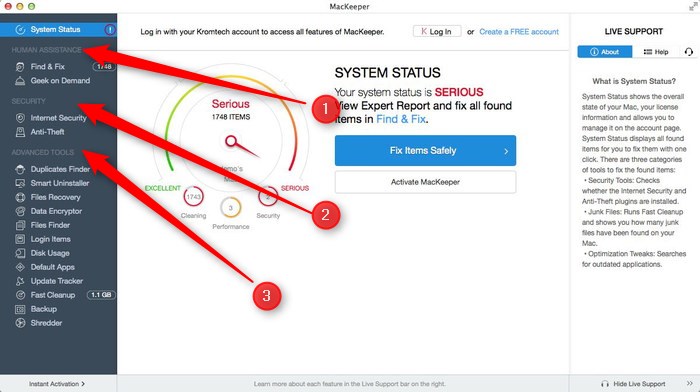 You can grab your Mackeeper Coupon Code today to try out the Mackeeper Software. 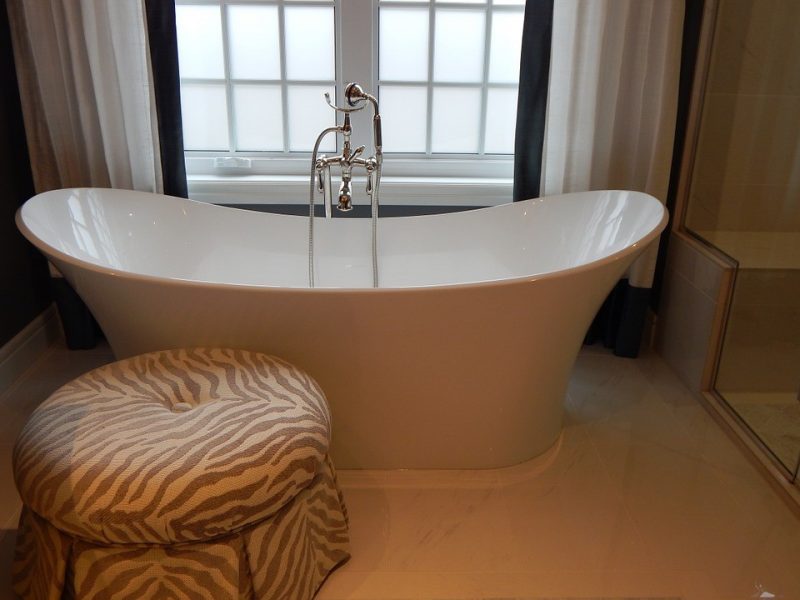 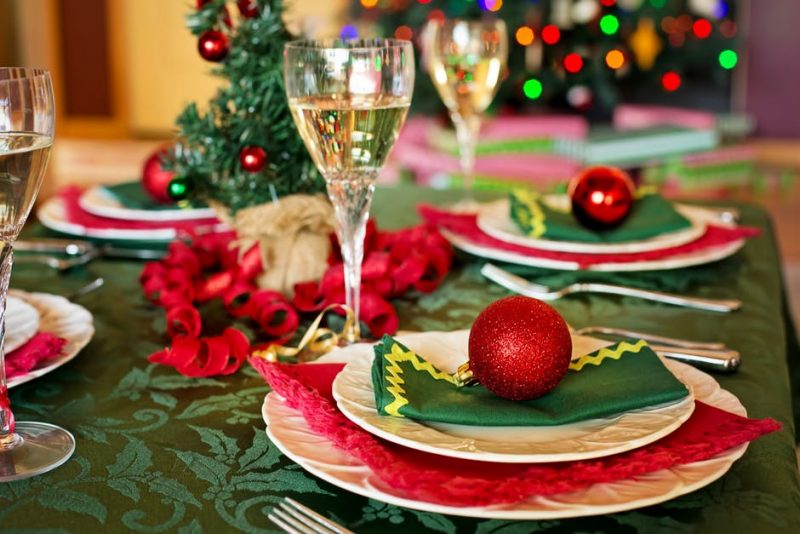 Perfecting the Art of the Family Christmas Dinner 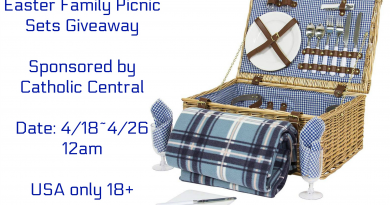 The Benefits of Music Education in Children