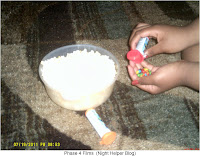 Let’s get the popcorn  and candy set up first. The kids were ready for Phase 4 Films the other night. We were getting ready to watch three new movies. It was only four of us, two of the little ones and myself on the couch and my other daughter on the floor getting ready to put the movies in the player. 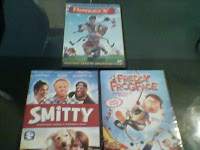 We had three movies to watch “Smitty”, “Freddy Frogface” and
“Donkey X” all movies can be purchased at Target, Walmart,or on-line at Amazon.You can find more information about these two films on the phase4films website also.

We started with “Smitty” first
Synopsis:
Mischievous thirteen-year-old Ben is sent to his grandfather’s farm for the summer, where he crosses paths with a lovable mutt. With help from the unlikely canine companion, Ben learns the importance of friendship, family and responsibility. When life gets tough for Ben, a friendly paw is all it takes to pull him through.

Our view of “Smitty”
Grab a box of tissue this movie was a tearjurker. I don’t know who cried the most the kids or me. I loved how engaged they were in this movie asking question to why the young boy name Ben treated his Grandfather and dog the way he did. Why was he so unhappy, why he seem to not like anyone one of the kids stated. It’s an OUTSTANDING family film that should be shared with the kids. It was a movie that shared how a little boy like Ben had to learn many lessons.

Next was Freddy FrogFace
Synopsis:

Being small doesn’t make life easy for little ten-year-old Victor and his friends, who not only have to face a world full of stern grown-ups but also the town bully Freddy Frogface. When a circus comes to the sleepy little town, Victor is thrilled at having the chance to perform in a talent show with his dog Sausage. Yet Freddy soon comes up with a sinister plot of his own to spoil Victor´s plans…

Our view of  “Freddy FrogFace”
We enjoyed this movie and the animation was nice. Some parts of the movie was funny and made the kids giggle a little but over all they kept getting up and leaving . I don’t think they really like it as much as !

Last one was Donkey X

Synopsis:
Follow Rucio, the most adventurous, brave, and mischievous donkey of Castile as he tells the true story of the legendary Don Quixote. Rucio jumps at the opportunity to join Don Quixote on his quest to battle The Half Moon Knight and overcome the dangerous obstacles that lurks them on the way.

Our view of  “Donkey X”
This was a great movie, we thought at first it was about the well known Donkey from Shrek but it wasn’t. Rucio seem to establish his own reputation by helping out this Knight he was funny and very charming. I think the kids really enjoyed it for they sat still through the whole movie.

All of the movies had there own plot and some were good and let’s say OK but for me and the kids out of all the movies we reviewed “Smitty” stole the night!

I received one or more of the products mentioned above from Child’s Play Communication  at no charge for review purposes only. All opinions expressed are 100 my own and were not influenced by any other source. I am disclosing this in accordance with the FTC.

Muck Pacy II Boots, stylish boots for the rider in your life!